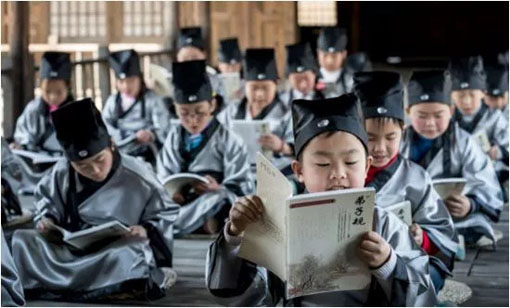 Yellow Emperor’s Classic of Internal Medicine propsoses may health-preserving rules and methods which cover the basic principles of traditional health preservation of China. The general health-preserving principles of Su Wen: Shang Gu Tian Zhen Lun are to “follow the law Yin and Yang, abide by natural rules, eat and drink moderately, live a regular life, and never get overstrained.”

Yellow Emperor's Classic of Internal Medicine rates “follow the law Yin and Yang, abide by natural rules” as the prime rule, which indicates the importance of exercise. To live a long life, man has to abide by and learn the natural rules and fit his exercise to the natural rules. Yellow Emperor’s Classic of Internal Medicine does not agree that longevity is inherent or destined. On the other hands it holds that man has the subjective initiatives to achieve it. We should not simply and passively adapt ourselves to the Yin and Yang changes of nature but fully make use of our subjective initiatives and follow the examples of ancient immortals to exercise ourselves persistently. In this way we will be more and more capable to master our own destiny and achieve “ultimate longevity”.

The spleen and stomach are the foundation of acquired constitution. The nutrient Qi converted from food and drink nourishes the viscera, limbs, and all other parts of the body. But we must take a moderate diet and never “drink wine as water and be extravagant”. Otherwise we will have “double appetite and impaired stomach and intestines” (Su Wen: Bi Lun). And appetite is a craving. Too much appetite will not only impair the body but also “damage the spirit”.  In addition, polyorexia, unhygienic diet, and dietary bias also belong to eating and drinking without temperance.

A regular daily life involves many aspects such as: seasonal changes, different times of the day, times of sleep, and living quarters, etc.

Su Wen: Si Qi Tiao Shen Da Lun elaborates the differences in health preservation between the four seasons and the regulation of daily life, and explicitly proposes the idea of “Nourish Yang in the spring and summer and nourish Yin in the autumn and winter”.

All things are “sprouting” in spring. The liver is the organ that corresponds to the nature of spring. Therefore we need to relax our emotions and adapt our living rhythm to the slow and easy atmosphere of spring in order to cultivate the growth-promoting Qi. “Spring is the sprouting season in which all things become active and flourishing. Therefore we should sleep early and get up early. In the morning we should water in the yard and walk slowly without binding our hair in order to promote the growth of Zhi and boost the sprouting Qi. This response to spring is a good way to health preservation.”

When summer comes, all things begin to “grow”. Therefore we should boost Yang Qi and purge it from our body. “Summer is the growing season in which all things grow vigorously. Therefore we should sleep early and get up early and avoid direct exposure to sunlight so that Zhi does not get agitated and the excessive Qi could be purged. This response to summer is a good way to health preservation.”

When autumn comes, all things begin to “shrink”. This is the time that we should restrain our spirit and Qi. “Autumn is the harvesting season in which the weather gets cooler and cooler and the earth-Qi becomes clear. Therefore we should sleep early and get up early in order to calm Zhi, retard the negative effects of autumn, restrain spirit and Qi, pacify the autumn Qi, contain Zhi, and clear the pulmonary Qi. This response to autumn is a good way to health preservation.”

When winter comes, all things begin to “hide”. This is the time that we should collect and hide our essence and Qi. “Winter is the hiding season in which water freezes and earth breaks. Therefore we should sleep early and get up early to catch the sunlight, so that Zhi could be latent, coldness could be dispelled, and Qi could be kept from leaking out of the skin.” This response to spring is a good way to health preservation.”

Yellow Emperor’s Classic of Internal Medicine discusses the importance of sleep frequently. We should not only sleep and get up according to the season, but also take noontime naps. Taking a nap at noon will promote the generation of Yin Qi. And we should go to bed before 11 pm at night in order to promote the generation of Yang Qi. This is because these two junction points are where Yin and Yang Qi comes into being. It is important to take a rest, a snap, or an exercise during such periods. But if we stay up or fail to take a rest during such periods, it is like killing a newborn baby on the labor bed. How can we expect it to grow in the future?

In addition to the time of sleep, we should also pay attention to the quality of sleep. Keeping a good mood is good for sleep. And we should avoid violent exercise, moving exercises that excite Qi, and excess food intake before sleep. Nei Jing: Su Wen: Ni Tiao Lun says: “One won’t sleep well if his stomach is not well”. This is so true.

In order to ensure a regular daily life, we should also pay attention to the geographical position of our living quarters, the orientation of our bed, and the control of light; failure to do so will also affect our normal daily life.