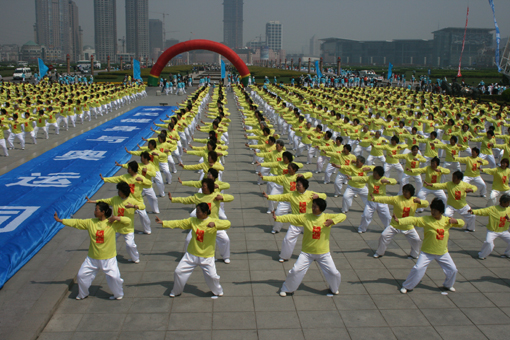 Health Qigong · Ba Duan Jin is one of China’s best traditional health-keeping methods. Our ancestors compared it to the beautiful brocade (“Jinduan” in Chinese) for its exquisiteness; and as it is composed of eight sections, thus it was crowned as “Ba Duan Jin” (“Eight Pieces of Brocade”). Ba Duan Jin is an independent yet complete health-keeping method, which integrates the yin-yang, five elements, meridian and collateral theories of traditional Chinese medicine. It functions exercising the balance capacity, preventing and curing diseases, as well as correcting the exerciser’s body shape. Besides, it is characterized with strong pertinence and wide application. It is a Health-keeping method that combines the static and dynamic movements, the physical and mental interactions, and the disease-curing and health-keeping functions. The origin of Da Duan Jin dated back to the North Song Dynasty（A.D.960-1127）. The earliest record of Ba Duan Jin appeared in the Jun Zhai Du Shu Zhi, (Jun Zhai Book Records) written by Chao Gongwu. It appeared again in Wen Yuan Ge Shu Mu (The Bibliography of Wen Yuange） a book authored by Yang Shiqi in the Ming Dynasty(A.D.1368-1644). One of Yang’s contemporaries Gao Lian composed a monograph on health preserving entitled as Zun Sheng Ba Jian (Eight Writings on Health Preserving). In one of the writings entitled as “The Guiding Method of Ba Duan Jin”, the author commented as following: “It shall be performed before late noon, for it is the best time. Recycle and reverse, as an Eight Diagrams does. ” This description indicates that “Ba (Eight)” in the title of Ba Duan Jin has a deeper meaning rather than the eight movements performed. Also, the “Jin” in Ba Duan Jin can be illustrated as the connection of sequential guiding methods flowing like the moving silk brocade, which indicates that the Methods are connected and limited among/by each other, recycling and reversing without stop.

The exercising methods of the current Health Qigong · Ba Duan Jin contains three parts including ideation, breathing and posture. The practice of Ba Duan Jin emphasizes the harmonious regulation of heart, breath and body. It requires an interactive coordination and connection of these three regulations for the purpose of dredging the Qi flow and strengthening the blood circulation. The movements of Ba Duan Jin are easy to learn. The formulas of the movements are put into verse, thus it is easy to be memorized and to be popularized. The practice of Ba Duan Jin is beneficial to the regulation of the health conditions of different groups, thus it is of significance. A research covered in the past several years brings us to the following conclusions:

In accordance with a report on the Chinese Journal of Basic Medicine In Traditional Chinese Medicine grouped the 129 Subjects into two groups, one group included 62 Ba Duan Jin exercisers, and the left 67 persons formed another group and served as a reference group. The baseline values of the two groups had no difference except that; the sit-and-reach value of the reference group was notably higher than the Ba Duan Jin exercisers’ group. The statistics showed that at the sixth weekend, the values of vital capacity, step test index, grip strength, sit-and-reach, eye-closed and single-legged standing, and the simple reaction time of the Ba Duan Jin exercisers’ group were comparatively higher than the baseline values. While for the reference group, only grip strength, sit-and -reach, eye-closed and single-legged standing values increased. At this time, the values of step test index and sit-and–reach of the Ba Duan Jin exercisers’ group were higher than the reference group’s. The result showed that exercising Health Qigong · Ba Duan Jin can profoundly improve the basic constitution of the sub-health. In another similar report on Guangdong Medicine, Wu Yanming divided 175 Subjects into two groups according to their age, and each group was subdivided into three subgroups, namely, the reference group, Health educating group, and the Ba Duan Jin group. The result showed that the Health educating group and the Ba Duan Jin group both enjoyed an improvement in the energy for people between age 35~55, and in the body curing  for people between age 56~75. The entire Subjects’ health condition was comparatively improved. For Ba Duan Jin group, the social function of people between age 56~75, and the physical role function and emotional role function were bettered obviously. It was concluded that Ba Duan Jin exercise combined with Health educating was beneficial to the improvement of life quality of the sub health people who suffer from diabetes. A research carried out by Jaing Min et al published on the World Journal of Integrated Traditional and Western Medicine takes Chinese clinical studies as its focus. The research indicated that Health Qigong · Ba Duan Jin can help the exerciser to enhance his inner organs’ functions and the physical conditions; and it can also be helpful in disease and aging resistance, as well as the treatment of certain chronic diseases. Sub-healthy state is caused by the unbalance of the Ying-yang, the dysfunction of inner organs, the disorder of Qi and Blood, as well as the broken regulation of physical body and mind. By exercising Ba Duan Jin, the Qi and Blood flow and the organs’ function will be regulated, hence, psychologically, the mental state will be bettered; and, physically, the function of inner organs will be enhanced. Therefore, the exerciser will be strong enough to keep away from diseases, and build up a healthier body. Thus the purpose of correcting the sub-healthy state is achieved. Gen Yuanqin et al share the opinion in an article that is published on the Chinese Journal of Traditional Chinese Medicine. Gen said in the article that exercising Health Qigong · Ba Duan Jin is helpful to strengthen the inner five organs. By improving the organs’ functions, Ba Duan Jin is very effective in getting rid of the exerciser’s bad mood and regulating the psychological sub health state. He believed that the exercise of Health Qigong · Ba Duan Jin may provide a new intervention method to the psychological sub health state.