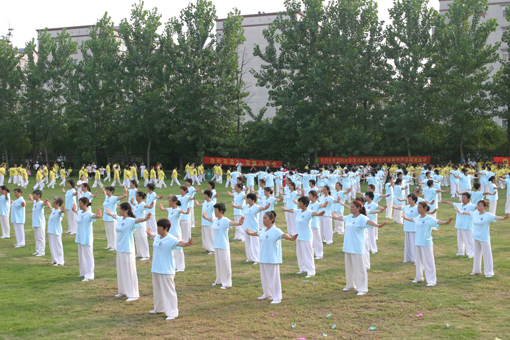 Secondly, once the mind has formed, it has a dynamic reaction on the qi. The dynamic role of mind on qi represents in the following aspects. (1) Consciousness can control the physiological and psychological activity in the practice through the human brain, so as to mobilize qi of the body, producing a huge efficiency. (2) Mind can guide qi by the action of the human brain, so that qi circulates along a predetermined direction in purpose as planned. (3) Mind can react upon qi by the action of the human brain. The so-called “transforming ferry into essence, transforming essence into qi and transforming qi into spirit” in the traditional Health Qigong is conducted under the counteraction of mind, to cultivate vitality through the exercises, achieving the effects of keeping fit, disease prevention and longevity.

What are the laws in the practice of Health Qigong exactly? It needs to be further explored by the academia. I believe that there are the following rules.

Seen from the materialist dialectics, qi is primary and objective, the circulation of qi in the body can't be changed by the human will. And the mind (consciousness or ideas) is secondary and derived. The primary and secondary relationship between qi and mind cannot be reversed or confused.

However, the contradiction between the mind and qi has an absolute sense but only within a limited range. The matter and consciousness can be transformed. The materialist dialectics believes that the material can be turned into spirit, the spirit can be turned into material. In the practice of Health Qigong, qi determines the mind. However, the mind can play a guiding role on the qi, which is a rule for all people. Nothing but qi of the exercisers of Health Qigong guiding is more strongly.

The mentioned "mind guiding qi” is in accordance with the laws of the circulation of qi in the body. That is, not all the Daoyin of the exercises are correct. Choosing those correct exercises to practice will have a good effect, otherwise it will not only be useless but harmful.

(2) The practice of Health Qigong should follow the rule of Ren channel descending, Du channel ascending, as well as the clear air ascending and foul air descending. Qi circulates in the twelve regular meridians and the eight extra channels, foul air descending along the abdomen and clear qi ascending along the back. Starting from Dantian, Qi flows down to the perineum, divided into two portions, respectively along the three yin channels in the inside of the leg, and down to the Yongquan point in the sole center. Then qi flows to the heel, and goes upward along the three yang channels in the outside of the legs to the perineum, and then goes upward along the Du channel through Weilu Guan, Jianji Guan to the Dazhui point, and qi is divided into two parts again, respectively going through Jianjing point and along the three yang meridians of hand in the outside of arms, qi flows through Laogong point and along the three yin channels in the inside of the arms to Dazhui point. Going upward to the bottom of auricle, qi is divided into two parts again, respectively going around the auricle from behind to front and back to the original place, then flows to Yuzhen point and Baihui point. Going to the Huizhog point, namely the upper Dantian, i.e. ophryon between the eyes, qi is divided into two parts again, respectively flowing along the outside of the eyes and collecting at the front of the ears to Yingen point, and connect Ren channel through tongue touching palate. In this case, qi flows to Ren channel from the Du channel through Tiantu point and Tanzhong point, qi sinking to Dantian finally. Qi goes and returns in such a circle continuously, thus forming a regular circulation.

Perseverance is very important in the practice of Health Qigong, because the fitness effect of Health Qigong cannot be achieved immediately, in which there is a process from quantitative change to qualitative change. Practice perseveringly can constantly enhance and enrich the strength of the body, clear the meridians and expel evil qi and pathogenetic qi. Over time, the vitality of the body is sufficient, and it will be able to clear the meridians and achieve the health and longevity purposes.