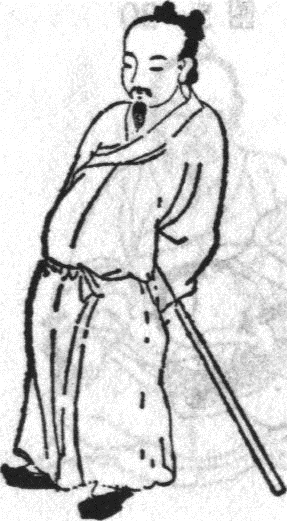 Wan Yu Xian Shu is said to be written by the physician named Cao Wuji in late Ming and early Qing Dynasties. It is one of the most important and most influential books of ancient Qigong. Many exercises spread so far are mostly based on this book. The chapter Zhuxian Daoyin Gongfa in this book records that ”standing with hands back, withstanding at your waist with a stick, putting the body's center of gravity at left, conducting qi for 108 times, after swallowing for 3 times, putting knees on the ground, sweeping forward several times, then putting the body's center of gravity at right, making the same practice. Indication: low back pain. ” (Figure 6). This exercise is fairly similar to the chapter called “Shenxian Kao Guai”, the Routine 35 in the Xiu Zhen Mi Yao Daoyin Tu. Essentially, this practice is to use the massage characteristics of rod for exercising, in order to meet the requirement for persistent, strong, even and gentle stimulation, so as to reach the effect of “deep penetration” of skill, and achieve a better results. In the Taiji instrument series, the main item currently used for fitness and life nurturing is Taiji stick. Taiji stick, also called Taiji ruler, is a traditional method of fitness spread among Chinese folks. Though it is not same in shape, it still has the same effects. Exercise is conducted mainly by such methods as turning, rolling, toppling, rocking, wringing, tangling, twisting and shaking. The deceased centencarian named Zhao Zhongdao was good at this method. He has made active contributions to the inheriting, development and dissemination of Taiji stick. “In the book Taiji Roushu Instruction published by Guandong Publishing House in 1928, Mr. Zhao Zhongdao introduced in the preamble thereof that: ‘After the founding of the Republic of China, when I traveled to Peking, I got the position of survey by the recommended of a good friend, and I met Mr. Wang Yongfu living in the west of the city through my friend, and he taught me about the inner method of Taiji’”. In 1942, he published Taiji Roushu Brochure. In 1950s, he founded a fitness society in Beijing, actively promoting and popularizing Taiji Stick. After that, he published the book Study on Taiji Ruler in Hong Kong in 1961. In 1970s, his correspondence student Chen Dacai and his disciple Hu Guangfa published some books in this area in Hong Kong, which are of a certain influence both at home and abroad. With publication of such books as Taiji Stick Qigong and Taiji Stick & Ruler Qigong in mainland China, this way of fitness is increasinly widely recognized and accepted by people. In 2007, the General Administration of Sport of China organized experts to compile, create and introduce a new method called “Health Qigong·Taiji Yangsheng Zhang”, which makes this unique way of fitness and life nurturing spread widely, hence forming relatively stable exercise groups in the society.