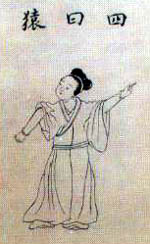 So, it can be said that, Hua Tuo saw the consistency between the physiological rule of five animals and that of human beings, therefore human beings would be able to be healthy and live a long life as long as they act according to the habits and characteristics of the five animals. This is just the thinking of “conformity”.

Third, movements were determined on the basis of physiological conditions of human beings and for the purpose of dredging meridians and collaterals, qi-blood and sinews, and then enhancing the functions of five viscera and six bowels. Accordingly, there are two logical clues: one is "the internal clue", namely searching corresponding animal characteristics with the principle of massage to five viscera and six bowels; another is "the external clue", namely searching corresponding animal characteristics with the principle of dredging meridians and qi-blood, while the key for achieving this goal is the movement of spine, because there are the ren meridian in front of spine and the du meridian behind spine, and these two meridians connect and communicate the meridians and collaterals of the whole body. The ancients had realized the importance of spinal movement, so Hua Tuo said "moving the waist", which means spinal movements by bowing forward and leaning backward. However, human body is a unity, so the two clues cannot be separated completely; while a person exercises his zang-fu organs, naturally he also exercises his spine at the same time, which is an integral process. Similarly, as Hua Tuo said “exercising all the joints”, it means conducting comprehensive exercise of all parts of human body. Modern physiological research argues that, a complicated nervous center runs in the spine, while its upper end connects the brainstem and its lower end connects the peripheral nerves. Exercising the spine produces stimulating action to the whole nervous system, which may result in enhancement in the nutrition effect of nerves and meanwhile may also promote the connections between nerves -- internal secretion --- immune network, so as to produce comprehensive promotive effects to human body. It can be seen that, just due to that Hua Tuo saw people did not often actively exercise their zang-fu organs and spines in daily life, but exercise of zang-fu organs and spine is very important to health and longevity, he adopted the movements imitating five animals for exercise. This is just the thinking of “inversion”.

(III) The naming of “Xi (Play or Exercise)” fixed the movements of five animals as a complete formula.

“Xi (Play or Exercise)”, is related to the primary “Wu (dance)”. Various “dances” with contents of imitating animal movements arising in primitive society, such as monkey dance, bird dance and bear dance, were called "Bai Shou Wu (Hundred-Animal Dance)” in Shangshu (Classic of History). In the Han dynasty, “Bai Xi (Hundred Plays)” prevailed, while “Bai Shou Wu (Hundred-Animal Dance)” was integrated into “Bai Xi (Hundred Plays)”. Zhang Heng in the Eastern Han dynasty gave relatively detailed records of the Palace Hundred Plays of the Han dynasty in Xijingfu (Rhyme-prose on the Western Capital), wherein, it mentioned many false-shape plays in which people acted as animals, such as bear play, tiger play, monkey play, elephant play, peacock play, giant turtle play, large toad play and performances of acting as magical creatures. For this reason, in the Han dynasty, “Xi(Play)” refered in general to such activities as singing, dance and acrobatics, which were of appreciation and self-entertainment nature.

Naming the movements of five animals with “Xi (Exercise)”, aims not only to categorize Wu Qi Xi (Five-Animal Exercises) into vaudeville, but also to take Wu Qin Xi as a kind of complete form of performance, which requires to pay attention to contextuality upon performance and exercise. This can be seen from the performance of “Bai Xi (Hundred Plays)”. Upon performance of “Bai Xi (Hundred Plays)”, each kind of false-shape play has a set of corresponding clothing props. The animals acted by performers marched on while dancing, whereas fiery trees spewing color flames led the way in the front, and some little players with strange looking played and entertained the animals.

As far as Hua Tuo’s Wu Qin Xi be concerned, its contents are composed of five groups of movements with different themes, and each group of movements consists of several movements. Each group of movements can play independent roles of exercising body, just as Hua Tuo said “If a person feels uncomfortable in his body, he should stand up and do a kind of animal exercise”; if a person exercises all the five groups of movements, he will achieve the effects of comprehensive body building, just as one of Hua Tuo’s students, whose name was “Pushi, who persisted in exercising it, and maintained normal hearing and eyesight as well as complete and solid teeth when his age exceeded ninety.” It is thus clear that, Wu Qin Xi is different from the previous single movements such as “bear hanging”, “bird stretching” and “strigidae glaring”, and it is a kind of routine form that not only has complicated movements assembly but also has complete theoretical foundation. The features of Wu Qin Xi lie in that, practising movements in a form of “Xi (Play)” puts an exerciser in a context of play and performance, and organically connects postures and internal organs, body and mind as well as human and nature. The human body building effects of such exercises conducted in a natural and harmonious state far surpass that of simple repetition of a single movement.

For the aforesaid reasons, the fact that Hua Tuo named the Five-Animal movements with “Xi” is an embodiment of holistic view of the Five-Phase theory; Hua Tuo’s Wu Qin Xi surpassed the entertainment sense of the Palace “Hundred Plays”, shifted to the field of body building and life nurturing, and fixed the five-animal movements in a complete formula, hence opening up the beginning of body building and life nurturing for later ages.