Among nine popular methods, Liu Zi Jue is the only one that focuses on breathing, and it is particularly important to learn to regulate breathing. Firstly you should grasp the correct breathing method and learn counter abdominal respiration, always focus on the pubic region with each breath at the navel. Secondly you should induce and conduct Qi in harmony with instruction, and get the rhythm of consistency between movements and breathe.

In practicing, consistency between movement and breath involves regulation and coordination of three rhythms, namely, the rhythm of movement, breathing and background music. As the rising and falling, stretching and withdrawing of movement, inhaling and exhaling of breathe, as well as powerfulness and weakness in music are all even number combination, they follow the same law and can be coordinated, thus in general condition, full synchronization can be realized among the three, namely, the rising and falling of one movement, one round of breathing, and one eight-beat syllable. However, we need to make subjective regulation in order to keep the same rhythm among three aspects, including the different round distances of different movements, different speeds for different movements, as well as inconsistent depth, speed and duration of breath due to complexity of movement. You can realize synchronization among the three by following the principle to inhale to rise, exhale to drop, inhale to stretch, exhale to withdraw, inhale to tighten, exhale to slacken, and after adjusting the speed and pause of movement as well as regulating the length, breath holding and air stopping in breath. The full guidance of my breathing rhythm in practicing Liu Zi Jue is as follows: 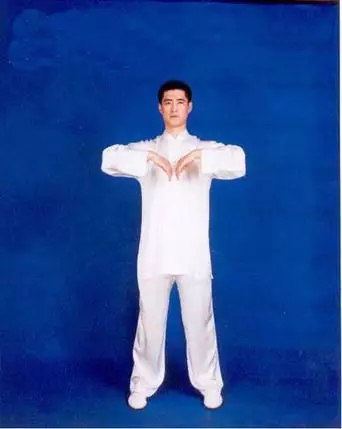