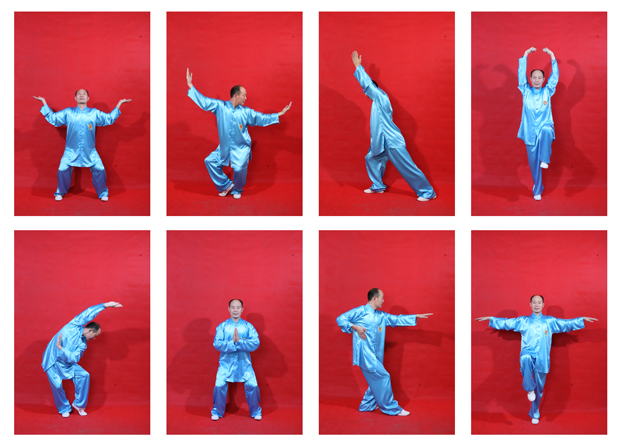 （III） Combination of Looseness and Tightness, Dynamic and Static

Movements during practice should be both loose and tight, deficient and excessive. The feature of dynamic and static should be demonstrated in such looseness and tightness, deficiency and excess. Moreover, looseness is the fundamental factor while tightness is means. Looseness runs through the entire exercise and tightness shouldn’t be too stiff for a long time. As to “looseness”, it means that when people are exercising, joints, muscles, ligament and other tissues of human body should be fully relaxed, which is deficient. Regards to “tightness”, it means human body should exert force slowly and appropriately, which is excess. “Dynamic” refers to movements conduction under the instructions of consciousness including internal dynamic and external dynamic. “Static” refers to seeming pause of the exercise system or local part in movements conduction, including internal static and external static. For example, it’s fully demonstrated in “Pulling Nine Cows by Their Tails” in Yi Jin Jing, “Tiger Springing” in Wu Qin Xi, and “Holding the Hands High with Palms Up to Regulate the Internal Organs” in Ba Duan Jin, etc. Its functions are as follows:

1. Start internal Qi: as what’s mentioned previously, “looseness” and “static” are helpful to the circulation of Qi and blood in the entire body while “tightness” can make relevant parts such as meridians, acupoints, muscle ligament and nerve & blood vessels pulled and stimulated to some extent, thus facilitating the start and normal operation of internal Qi or blood. Take “Deer Looking Back” in “Wu Qin Xi of Health Qigong” for example. It requires great side pulling and body turning so it can effectively stimulate the liver channels under the armpits, vital points, governor meridians and bladder meridians at the waist and back as well as muscles at the waist and back. Further, it can dredge the liver Qi, smooth governor meridians, regulate kidney Qi and loosen the muscle adhesiveness at the waist so as to achieve the purpose of strengthening kidney and waist, benefiting Qi and smoothing Yang. On the contrary, if movement stretching is inappropriate or the time is short and thinking can’t be concentrated, effective stimulation can’t be generated; if movements are too violent or the time is too long and limbs are stiff, damages may be caused to part of the body. The rehabilitation therapy of many joint diseases nowadays are conducted through static stretching.

2. Relieve adhesion: the relaxation of body and limbs in the exercise can increase the amount of open blood capillary in muscles and make the microcirculations smooth. Appropriate force can stimulate meridian points and nervus vascularis so as to start internal Qi, separate muscle adhesiveness and promote blood circulation. According to the physiological principle, each muscle of human body is composed of muscle fiber, vasoganglion and nerves, etc. The muscle fiber of muscles is coated by connective tissue membrane. If a person’s local muscles are too much stressed for a long time due to work or life habit, the blood vessels will be burdened for a long time and the blood supply in the muscles is insufficient; plus, the attack of wind, coldness and damp evil will make the elasticity of muscles lowered, thus causing strain, adhesion or intensified pain such as people who use computers all the time. At this time, we can pull muscles with the combination of looseness and tightness, especially under the situation of rotating such as “Looking Backwards to Prevent Sickness and Strain”. In this way, it can better loosen the muscles and make Qi and blood smooth. In the long run, the exercise is bound to alleviate stiffness and remove adhesion.

3. Pacify spirit and regulate breath: as what’s mentioned before, the relaxed exercise form can help concentration of thought, peaceful mind, slow breath and circulation of Qi and blood. The exercise feature of combination of dynamic and static is helpful to the coordination of autonomic nerves and strengthens the balance between lymphocyte and granulocyte in the right and left white blood cells, thus enhancing immunity of human body. Besides, static can lead to spiritual relaxation, further slow down heart rate and lower blood pressure. The quotations such as “Spirit should be peaceful instead of being anxious” and “Less will be wasted in peaceful status” just explain it. In addition, the feature of dynamic and static is the prerequisite for combination of looseness and tightness. Without the exercise feature of external dynamic and internal static, spirit won’t be peaceful, movements won’t be stretched and limbs can’t be relaxed; on the contrary, if external static and internal dynamic can’t be achieved, limbs can’t be fully pulled and the health effects of the movements can’t be obtained.